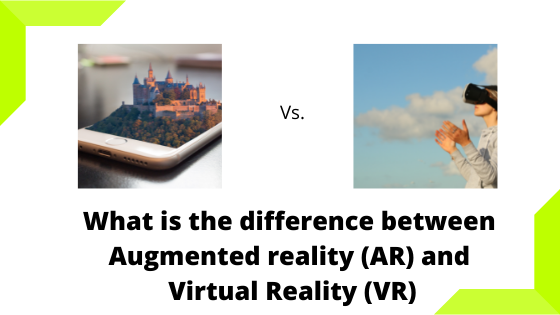 What is the difference between Augmented reality (AR) and Virtual Reality (VR) ?

Augmented reality (AR) and Virtual Reality (VR) bridge the digital and physical worlds. They allow you to take in information and content visually, in the same way you take in the world. AR dramatically expands the ways our devices can help with everyday activities like searching for information, shopping, and expressing yourself. VR lets you experience what it’s like to go anywhere — from the front row of a concert to distant planets in outer space.

What is Augmented Reality (AR)?

Augmented Reality (AR) opens up new ways for your devices to be helpful throughout your day by letting you experience digital content in the same way you experience the world. Augmented Reality (AR) is a perfect blend of the digital world and the physical elements to create an artificial environment. It lets you search things visually, simply by pointing your camera at them. It can put answers right where your questions are by overlaying visual, immersive content on top of your real world. Augmented reality has nearly limitless possibilities. Phone-based AR software has been recognizing surroundings and providing additional information about what it sees for years now, offering live translation of text or pop-up reviews of restaurants as you look at them. Dedicated AR headsets, such as the HoloLens, can do even more, letting you virtually place different apps as floating windows around you. Augmented reality enhances the real-world with images, text, and other virtual information via devices such as heads-up displays, smartphones, tablets, smart lenses, and AR glasses. Augmented reality is useful for more than just entertainment. Retailer IKEA created an AR app that helps shoppers visualize what certain products will look like in their home before they purchase them.

What is Virtual Reality (VR)?

Virtual Reality tools already help surgeons plan surgery, individuals experience a travel destination even before they take flight, children learn in a simulated (but very real) walk on the moon and soldiers train for combat scenarios, but the future will be full of even more VR applications as businesses of all kinds figure out ways the technology can enhance operations.

ScienceSoft: ScienceSoft is an augmented reality company that can boast an impressive track record of 25 years in 3D modelling and 16 years in AR development.

Niantic: The Company is the developer of the widely popular Pokemon Go, which generated $2 billion from in-app purchases. Ingress Prime and Harry Porter: Wizards Unite are some of its developed games.

Nreal: Nreal was the first to show us what a real mixed-reality consumer product looks like–one that looks more like a pair of glasses than a helmet and costs less than $500.

AppliedVR: AppliedVR is perhaps the best-known of a cadre of VR content companies that specialize in helping people deal with pain and anxiety.

NEXT/NOW:  NEXT/NOW is a Chicago-based creative technology agency founded in 2011. The team of around 20 pride themselves on creating digital brand experiences for physical spaces through AR/VR development, marketing services, and custom software development.

Treeview: Treeview is a boutique AR/VR shop that offers development services for startups.

Virtual reality (VR) and augmented reality (AR) have exciting potential in the future of gaming, marketing, e-commerce, education, and many other fields. Both technologies are known for their enriched experience that brings together a virtual world and the real one with enhanced, 3-D visuals. Companies and developers are adopting AR or VR or both in marketing, education, training, remote assistance, exercising, remote diagnosis of patients, gaming, entertainment, and many other fields. Virtual reality apps allow you to immerse in a computer-generated virtual and imaginary world while Augmented Reality apps allow you to do location-sensitive, interesting things in your location. AR, for instance, would allow you to get suggestions for hotels you can visit for the menus you like.